I hope as you’ve experienced weeks of blogs and personal testimonies during our $100,000.00 in 100 Days Campaign, you are beginning to get a true feel of the life-changing work we at Courage Worldwide are privileged to participate in, as well as tangible evidence of what your giving has provided for this vulnerable population. To give you an even greater sense of what your support has accomplished, I want to detail all the successes we have experienced over the last 10 years. In future weeks, I will explain the current challenges we are facing, as well as outline our dreams and plans for the future.

Ten years ago, Courage Worldwide (CWW) was made up of a handful of volunteers with a broken heart for victims of sex trafficking and a God-sized dream to build them homes and call them family. I admit, we were completely naïve as to what that really meant. Looking back, I am thankful—if we had known what we were stepping into, we might have been afraid to attempt something so big and out of our respective wheel houses. Due to the tremendous courage and faith of those few, we watched God multiply our efforts and your giving, just as He did so long ago with the little boy’s lunch that fed thousands. Listed below are just a few of the incredible triumphs we’ve watched God orchestrate during the last 10 years:

Two long-term mental health treatment homes for victims of sex trafficking were opened—one in the US and one in Tanzania. Though the age group of the home in California changed from housing minors to housing those over 18 (due to state license changes), both homes remain open—and have expanded capacity and services. We have tripled our capacity over the last 12 months and are now serving more victims and their children. 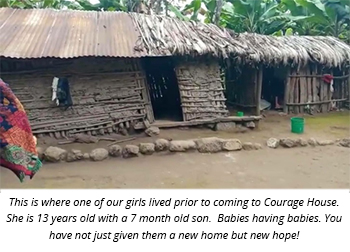 Expanded operations in Tanzania by purchasing property. These properties have existing buildings that will allow us to increase our capacity in serving minor victims of sex trafficking. When funding is secured and construction is complete, that capacity will increase from fifteen to fifty full time residents, allowing for up to eight of the resident’s children to reside with them, along with a school, preschool and transitional home for our over 18 residents.

87 girls have called a Courage House home, with 36 months being the average length of stay. Per our mental health professionals, healing from trauma is a long term endeavor not a short term program. At the beginning of her stay, each girl at Courage House develops a Unique Life Plan (ULP), setting her own goals that will help achieve the deepest desires of her heart. Comprehensive services are given to aid in the healing of her mind, body, emotions, and spirit, as well as tapping into her individual dreams and destiny.

78% decrease in mental health symptoms after a 12 month stay at Courage House. Courage House was fortunate to have been chosen to be a part of a 5 year mental health study by an outside organization that assessed and documented these results. Again, the greatest results are seen with a long term commitment to these vulnerable young people. 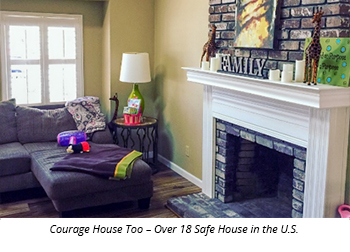 100% increase in grade point average (GPA) in academic studies after a 12 month stay at Courage House. For most of our girls, school has been a place of failure and defeat until Courage House. With initial the focus on their physical wellbeing and emotional healing, academics then can become a place of success and confidence. We have residents who are now attending college and pursing their academic dreams.

Resident Retention Rate average at Courage House is 85% for the US home and 95% for Tanzania. Runaways are a common challenge in group home care. Individuals who have experienced complex trauma often react with a fight, flight, or freeze response. In creating the Courage House model, we have intentionally prepared for these responses with increased staff training around the issue of trauma, as well as increasing the frequency and modalities of our trauma therapy. Residents have also been taught coping skills for the fight, flight, or freeze response.

100% decrease in destructive and/or violent behaviors after a 12 month stay at Courage House. Again, this behavior is common in teen/early adult trauma victims due to the fight, flight, or freeze response and is decreased at Courage House due to the coping skills stated above along with the peaceful environment intentionally created.

Provided legal representatives and trial preparation for residents. A core component of Courage’s program is supporting the girls who feel compelled to testify against their traffickers. We walk through the entire trial with them—from the time they are notified they will be appearing in court, all the way through the final sentencing hearing. The Courage House staff, therapists, our staff attorney, and the prosecuting team collaborate in close partnership to ensure the best possible outcome for our girls. Justice and restoration are inexorably linked: one cannot happen at the expense of the other. One trafficker received a 34 year sentence and another a 141 year sentence where a Courage girl testified. In Tanzania, we have a group of lawyers who train on legal rights and advise our girls and staff with court cases as well. We’re grateful they do this work pro-bono.

Developed an outline and blueprint to prototype the program of Courage House. This process has helped to streamline the process to open additional homes in other states and countries around the world.

Launched the C2BU Jr. High & High School for residents at Courage House Tanzania. It is the law in Tanzania that if a girl becomes pregnant she can no longer attend school—it is illegal – and therefore increases her risk of becoming a trafficking victim or forces her to look to prostitution as a viable option to help support her family. This was the impetus for us to open a school for residents of Courage House since so many come to us pregnant or with young children. Since we are classified as a residential shelter the government allowed us to start a charter school on site so that residents with children can attend school! 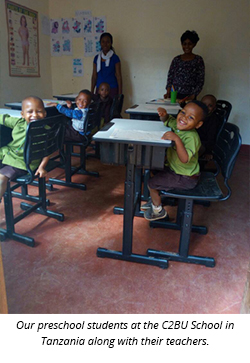 Launched a preschool for Courage House Tanzania residents and staff children. On the opposite end of the spectrum, it is the law in Tanzania that all children must attend a preschool. Many of our staff members, and all of our residents, are not able to afford the school fees for preschool therefore they would be forced to stay home with their children or again, make prostitution a viable option. This drove our decision to open a preschool on our C2BU School campus.

Opened a Sewing Center in Tanzania as a preventative measure against trafficking. After laboring to provide services 24 hours a day, 7 days a week, the community asked us if we could help with a preventative program in the area. To date, over 100 teens and young women, ages 14-20, have received services and training via the sewing center. We are currently looking at options for a Courage Café at the base of Mt. Kilimanjaro to provide jobs for our over 18 residents and for at risk youth in the area.

Hosted a Global Sex Trafficking Summit. Attendees and speakers came from across the United States to learn from each other on best practices serving this population. It was the first of its kind in Northern California.

Produced 2 Music CDs. These CDS were produced alongside national recording artists to raise funds and bring awareness to the issue of local and global sex trafficking. This also resulted in producing more than 25 concerts across the nation where thousands learned of the plight of these vulnerable young people.

Courage Worldwide was one of 5 organizations featured in a national documentary, In Plain Sight. Produced by Grammy Award winning singer/songwriter Natalie Grant and directed by award winning filmmaker, David Trotter, the film highlights the real issues of sex trafficking in the US and those working to rescue and restore victims.

Received numerous national and community awards. These awards have highlighted our work with victims of sex trafficking and community education as well as bringing attention to this crime and its victims.

I stand humbled and amazed at all God has done on behalf of these we have been called to serve. It is difficult to put into words what an honor and privilege it is to build them homes and call them family. It is even more difficult to describe how they feel about you, our supporters. They know without you there would be no resources, no services – no homes. You don’t even know them, but you have provided for them. You haven’t met them, but you have lifted them up in prayer. You have been the answer to their prayers, and to ours. Ten years ago, all we had was a dream—and now, because of you, our girls have a new reality, a new home, and a new future. Thank you. We covet your continued support.

A Word from Denise Siemens, Founder of Arise! Women

"It's hard to be thankful right now."