“Little Did I Know…”

“Little Did I Know…”

During this week’s installment of the $100,000.00 in 100 days, you will hear from Stephanie Midthun. Steph has had a multitude of roles at Courage Worldwide during the last 10 years, start out as a volunteer, generously offering her time and talents to help rescue and restore children who have been trafficked for sex. Little did she know that when she said yes to partnering with me and Courage Worldwide, that she and her husband would feel called to move across the world to oversee our operations in Tanzania – little did she know she would fall madly in love with the children and young women and their children; helping build them homes and call them family. Stephanie has such a passion for justice that is cloaked in a heart of mercy. She has been the best battle buddy a person could ask for. She is fierce and loyal; believing in the mission of Courage Worldwide and the destiny of these children. Stephanie is now the Executive Director of Courage House Tanzania. Under her and her husband’s leadership, we have expanded from one home with six children, to two homes serving over twenty (20) young women and their children with plans to add another 20 beds during this giving campaign and into 2019. I cannot imagine this journey without her.

Little Did I Know… 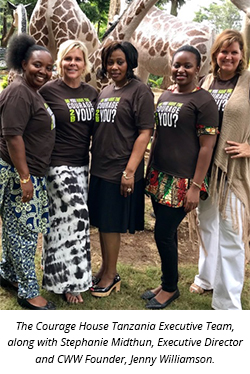 10 years ago I had been praying for months about what God had for me next. I didn’t have any clue what it would be, but in my spirit it felt, big and it felt heavy. Somehow I knew it had to do with children in my community. It was the summer of 2008.

A few years before that, my heart had been wrecked for the street children in Africa after I went to Kenya in 2003 for the first time. I was messed up. I was broken and I knew I had to do something. I told God if He called me to move there I would. I fell in love with the people and this place that I once feared. God told me very clearly to be His voice for these children. And so I did.

I found my purpose… to use my gifts in music and gather musicians together to raise awareness of the plight of these children and get them off the streets and into a home. We recorded a CD and set out to raise funds to help. My heart and love didn’t change for Africa, God just added to that call a few years later and said ‘now do something also for children in your community.’

In August of 2008, I was reading the Sacramento Bee one morning and I saw Jenny Williamson’s picture on the front page. She boldly declared that she was going to build a Courage House for children who are trafficked in Sacramento- children who were being sold and exploited and have no place to go. I was shocked. I couldn’t believe this was happening in my city. Hundreds of children were rescued by the FBI at that time. I called Jenny and was one of 200 calls that she received from that article and that meeting forever changed my life.

Little did I know that I would write a song, gather musicians, write more songs, record a couple of CD’s and do benefit concerts that would help to mobilize the community to give, to volunteer, to pray and to be a part of changing the lives of these kids who truly believed that no one cared.

Little did I know that I would meet these girls and hear unimaginable details of their stories that kept me up at night. That I would fall in love with them and that some would call my husband and I “Uncle and Aunt,” “Mama and Baba,” (Mom and Dad) and now Babu and Bibi (Grandpa and Grandma) and that my husband Joel would baptize many of them and pray for them and pour into them spiritually. We loved and love them like family.

Little did I know that my career would change a few times… After being a music director for 25 years in the churches we served, I started out volunteering for Courage Worldwide and eventually was hired as Creative Director, then later as Community Resource Director. Last year God made it very clear that He was calling both my husband and I to leave our beloved grown sons, our family, our precious church plant where we pastored for 18 years, to move to Tanzania to be Executive Directors of Courage House.

Little did we know that this would be one of the most fulfilling seasons of our lives even though it’s been a drastic career change for both of us. As we prepare to come home to the U.S. for the first time in 15 months, little did we know that now Tanzania felt like home and now we are leaving our African family for 3 months and it’s hard to leave even for a short time! 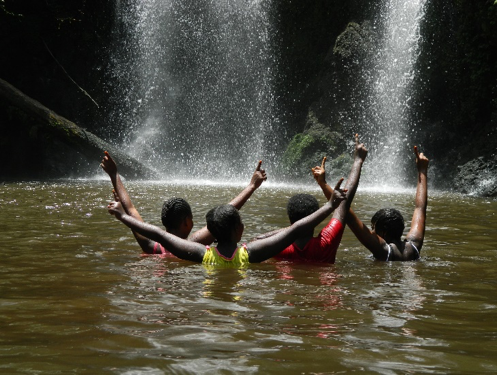 Little did we know that we would write our first book our first year in Africa called ‘Battles and Breakthroughs in Setting Captives Free’ and that God would open doors for us to speak both in the U.S. and Africa. This is so funny to me because public speaking was one of my biggest fears.

Little did I know, that I would see promises and dreams fulfilled both in my life and the lives of our girls at Courage House. The dream God gave Jenny Williamson many years ago for Courage Worldwide was to build homes and call them family…

Little did any of us know the enormous battle that would rage over this powerful vision from God and the beautiful miracle of healing that we have witnessed first hand in dozens of girls (87 girls and many of their children) who now have a safe home and a forever family at Courage House.

Little did I know that they would become my family too.

Friends, WE NEED YOU more than ever! Please continue to join hands with Courage Worldwide so that children around the world can know their true destiny and purpose God has for them. Some of our girls at Courage House want to be doctors, teachers, lawyers, journalists, pilots and more. A baby was born this week and this young 13 year old Mama would be on the streets with her baby if not for Courage House – if not for you! Please consider giving during our $100,000.00 during 100 day campaign. THANK YOU and GOD BLESS YOU.

"Courage Worldwide, from the beginning, believed in me..."